With consumer confidence on the rise, interest rates at all time lows and financing availability made easier with loser lending guidelines we have seen well priced distressed sales (REO’s and short sales) receiving multiple offers in a matter of days of being listed. Conventional resale listings are also starting to get more and more activity by the day.

This has caused a significant reduction in available inventory steadily throughout the year that paired with the lack on new construction (no new supply in the market) has pushed prices quite higher towards the end of the 2011 calendar year and anticipating prices to keep rising throughout 2012.

I ran some stats for the year and below I summarize my findings. I also posted a spreadsheet with all the condo sales for the year categorized by building. Feel free interact with the spreadsheet, it’s been built and design with the end user in mind. You can sort data, filter data, etc so you can access the information that you want. This is a great tool for running comps and analyzing 2011 sales for all San Diego luxury condos by neighborhood, by building and more.

It’s surprising to see such a quality building overall be the lowest price sale in the city among luxury buildings. However it’s important to keep in mind that this sale was for a second floor unit facing the railroad track. Furthermore, The Grande North was involved in litigation action throughout 2011 affecting the availability of financing and this pushing prices down on the tower.

On the flip side the highest sale per square foot was at The Grande South Tower (no litigation at this tower) for a penthouse level unit with 2 beds plus den and 2 baths with 1,944 sq ft selling at $921 per sq ft. This unit is on the 36th floor featuring panoramic views of the bay and the selling price was $1,790,000.

The overall lowest sale of the year for a luxury condo in downtown San Diego was made at the Renaissance towers. This was for a 1 bedroom 1 bath unit on the 12th floor with 770 sq ft that sold for $258,000. The per square foot price of that deal was $335 per foot.

The overall highest dollar sale for 2011 was at the Renaissance as well. This time for a penthouse unit with 4,528 sq ft sold for $3,000,000. Despite being the highest sale for the year in nominal terms, this only averages to about $663 per foot which is an incredible deal for a penthouse level unit considering penthouses in other luxury high rise buildings sell for not less than $900 per foot.

The East Village district was the district with the lowest sale averages for luxury condo residences with a per square foot average of $471 a foot and the average sale being $588,751.

The Columbia (Waterfront) District keeps establishing itself as the most expensive neighborhood in downtown San Diego. With nothing but luxury high rise buildings on the district and the prospect of the North Embarcadero Visionary Plan slowly coming to life, property values here keep rising and are expected to continue climbing. BOSA is expected to build two new luxury high rise towers within the district starting construction sometime in 2013.

The average sale in the Columbia District was $498 a foot and the average sales price was $790,642 way above that of the East Village.

Building with the most sales
Bayside = 36 condo sales

Not surprising as many of these sold as new construction at terrific prices offered by BOSA. Bayside quickly sold out throughout 2010 and early 2011 as BOSA was offering foreclosure level pricing to compete against the flood of short sales and REO’s that hit the downtown market.

Building with the least sales
The Metropolitan = 4 condo sales 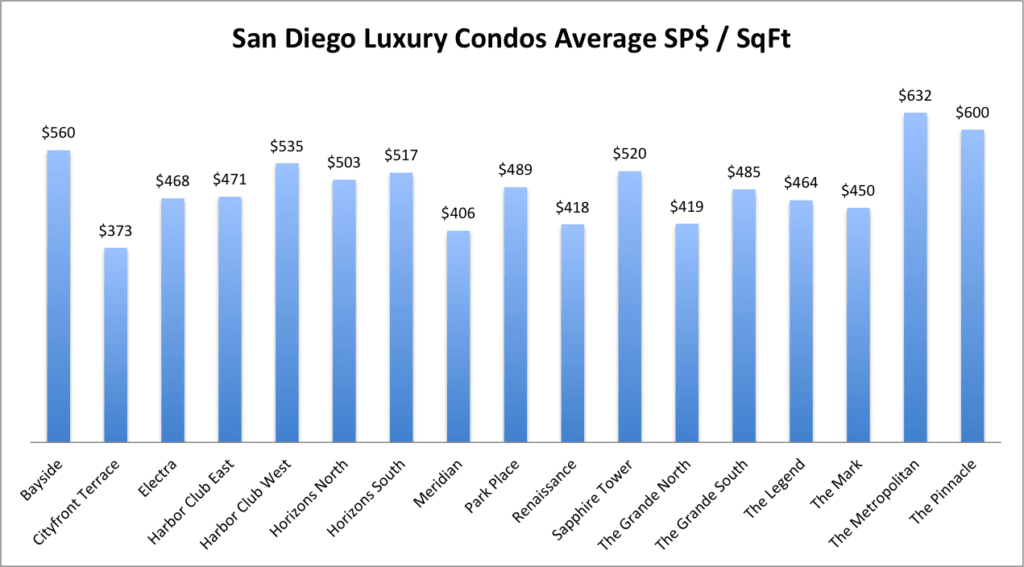