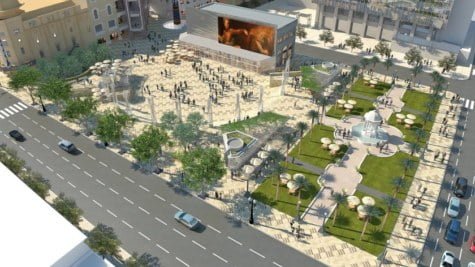 Estimated to be completed by the summer of 2015 (plans got delayed several times), the 1.5 acre Horton Plaza park will cost an estimated $8 million. Westfield, the owners of the Horton Plaza mall right next to the park would then maintain the park for the next 25 years so it won’t burden the city of San Diego’s general fund.

Groundbreaking on the 37,000-square-foot urban plaza and demolition of the former Robinsons/May building on the site took place in November 2012.

As part of the agreement between the city and Westfield is that Westfield must put over 200 events per year which might include Farmers markets, concerts, movie series and holiday celebrations.